Can you remember all the way back to junior high and high school? If I think long and hard enough, and rummage around Facebook long enough I can do it. It brings back a lot of memories of people, places, and things that I had to do.

To me, in my youth, there was nothing more embarrassing than having to ask other people for money. Remember those candy bars that we had to sell to go on that band or choir trip? Did your school even do that? Mine did, and for good reason. We went on trips every year… expensive trips. At least to a high school kids whose parents weren’t overflowing with lots of extra money.  And I am not a hundred percent sure, but I think my mom may have been just as embarrassed to sell that crap as I was. Doesn’t help when both she and I didn’t want to sell it. Which meant that I or we would have to somehow come up with the money outside of that fundraising. Who wants to sell a bazillion candy bars anyways. I would have much rather eaten them… and sometimes my brothers and sisters and I did. We would owe ourselves like $15 dollars in Reese’s Pieces money, or something like that (mmmmmmmmmmm, Reese’s Pieces. Wish they had those in Korea…

Another time, I was commuting between my university and this theater show I was doing about two hours away from my campus (so dumb), but things you do for love… So, I was filling up with gas, not a lot, but on my way to the register realized that I didn’t have all the money. I was five dollars short. Man, whaaaaaat. I had no other money too. Not in a bank account, no check card, no credit card, nothing. It is, to this day, the only time I have had to “beg” for money. I had to stand there at the pump, dumb college student that I was and ask people for a dollar or two until I got enough money. They probably thought I was the dumbest kid ever, or a drug addict. Probably both actually.

The thing is, sometimes you find yourself in these situations, and usually for two different types of reasons.

1. Because of poor planning and a lack of vision/foresight. This is because you don’t have the ability to understand a situation well enough to know that (A) you aren’t ready or shouldn’t be doing this or (B) that you aren’t carrying out the right task. This brings along with it the high probability of failure, and lack of provisions to carry out the job.

2. God has called you to a great plan AND He is calling you to rely on Him for all of your provisions. When you are called to this it WILL take a massive  amount of faith in your provider (God) and may also take a massive amount of effort on your part.

I want t focus on the second one right now, because I hope that I have long outgrown the first. I have begun to notice two things when it comes to living out the second situation here.

1. Being called by God to do something does not, if ever, mean that it will be easy. If it is truly what you have been called to do you will reach the end point, but in what way you get there is totally God’s call. He may just take you the long really hard way.

2. Because this is the thing you are called to, there will be degradation of fear and embarrassment.

Which is what brings us back to my original point with those stories. When I was younger, my reason for doing something was far from important to me. I could look at the reason I was raising money, know it would be awesome to go, but far from something that was worth asking people for their money for.

Today, I am raising money for a missions trip to Cambodia. I am raising money to go on a trip I feel God has called me to step out and be courageous in doing. Not because I always feel comfortable about it, not because I always want to go, but because He has something huge planned. I was told, not suggested, not asked, not even given the option, but I believe that God has mandated I be on this trip. So much to the point that I had been prepared to quite my job to go on this trip. And I like my job now… for the most part.

Build a Ministry: Build on Prayer

Invest and Grow: Doing as Jesus Did 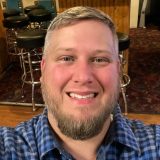